Ancient Elgin monument to be refurbished

One of Moray's oldest monuments is to get a £55,000 renovation

One of the oldest monuments in Moray is to be given a facelift.
The restoration of the Muckle Cross in the centre of Elgin was given the go-ahead by councillors on the local authority’s policy and resources committee.
The work is estimated at £55,000. Funding will be provided by £20,000 from Moray Council, £15,000 from the Elgin Common Good Fund and up to 50 per cent from the Elgin Conservation and Regeneration Scheme.
Councillors were told that the Muckle Cross is showing significant signs of deterioration, and that the refurbishment would greatly enhance a part of Elgin’s heritage and be a tourist attraction within the central shopping area.
In medieval times the cross stood at the heart of Elgin and was used as a gathering point for proclamations. A second cross was erected in 1630, surmounted by a lion. A copy of this cross was re-erected in the late 1880s, with the original lion atop. The Muckle Cross was used for proclamations up until recent times, the last one being when the coronation of Queen Elizabeth was announced. 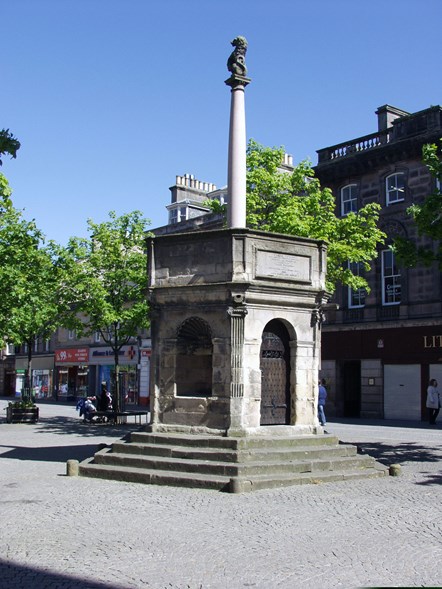 Ancient Elgin monument to be refurbished