Moray Council’s Chief Executive, Roddy Burns, joined gritter drivers on one of the busiest snow days of the year so far, 14 December 2022.

Ploughing and gritting the priority one B9010 road from Elgin, through Dallas and over to Knockando and Archiestown, was an eye-opening experience and one that helped the Head of the Local Authority further appreciate the winter maintenance programme.

“I’ve always understood the perils our gritter and plough drivers face when going out in the blizzards and snowfall we’ve seen in recent days. However, seeing it from inside the cab, listening to driver, John Kessack’s, experience, and witnessing it for myself gave me an even deeper appreciation for the work that goes on behind-the-scenes from our winter maintenance team.

“Our drivers are often the first on a road that hasn’t been treated, not a prospect many of us would look forward to. Their diligence and skill should not be underestimated as they keep us moving throughout the winter months.

“My thanks, on behalf of residents, go to the whole team for keeping Moray moving safely.”

Moray Council is responsible for around 968 miles of road.

There are 13 multipurpose vehicles that can be used for ploughing, gritting and throughout the year as a loading bearing lorry. That’s one for each of the 13 priority routes in Moray, plus back-ups.

Priority one (P1) routes make up around 40% of Moray Council’s road network.

There are 28 smaller pavement and footpath gritters.

We have 51 drivers on a rota for winter maintenance – they stick to the same routes so know the roads well. They also work in the roads team throughout the rest of the year.

Our winter maintenance programme runs from 6am-9.30pm, seven days a week and on public holidays.

There are four duty officers on a four weekly rota keeping an eye on the Met Office weather forecasts.

These are backed up by six duty supervisors who are in the depot from 5.15am getting vehicles ready and planning morning routes.

Myth one: the gritters aren’t out

Our gritting schedule and the priority routes are set out on the interactive map on our website – gritters have live trackers on them so we can see where they are.

The decision of when to send gritters out is led by the data we receive in through the 25 weather stations across Moray providing temperature readings, Met Office forecasts, and the road temperature falling below 1°C.

This is why you might see gritters out when you don’t think it’s that cold – the road temperature is lower than the air temperature.

There might be a couple of things going on here – the gritter could be on their way to or from their route. If they gritted as soon as they left the depot only that area would be done. The gritter won’t start spreading until they’re at the start of their route and will stop at the end of it.

We currently have 28 farmers contracted to help the council clear smaller roads around Moray. We can supply a blade or plough and are extremely grateful to them for taking on this work.

We work through our priority list to make sure main routes between communities and areas with high traffic levels are cleared first, moving on to secondary routes and so on.

The P1 network is treated first and a treatment for frost or ice should be completed within two and a half hours. When ploughing of snow is necessary, the treatment of the P1 network takes considerably longer.

Residents can help themselves to grit from our grit bins to clear the areas in and around their property, if they’re able to. A map of grit bins is also on our website and refills of bins can be requested there too.

Myth five: there are no council gritters on trunk roads

The A95 (Keith to Aviemore) and A96 are the responsibility of Transport Scotland and maintained by Amey so you won’t see council gritters spreading on those routes. 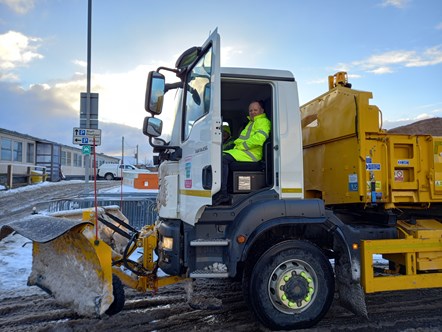 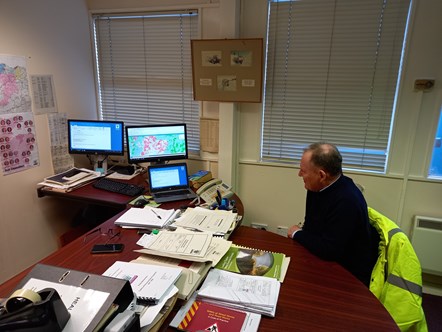