The completion of Speyside’s £390,000 Low Carbon Hub is to be celebrated later this month.

On 17 July residents and visitors are invited to Alice Littler Park in Aberlour between 11am - 3pm to a belated launch event, delayed by pandemic restrictions.

Moray Council and Moray Carshare are hosting the event, which will include Bike Doctor sessions, a led cycle, health walk, bike register safety kits from Police Scotland, and the chance to try different types of bikes and enjoy fun outdoor challenges.

The Hub has been funded by the European Union’s Regional Development (ERDF) and Transport Scotland, via the Low Carbon Travel and Transport Challenge Fund. To date, the project has seen major improvements over 10km of the Speyside Way between Craigellachie and Aberlour; three new electric vehicle charge points at Aberlour, including two ‘rapid’ chargers (one of which will be dedicated for charging public transport buses) and a third, fast charger for the dedicated use of the Moray Carshare membership; electric car and e-bike hire services from Moray Carshare; and bike repair stations at key points along the Speyside Way.

Moray Carshare manager, Gordon McAlpine, said: “A car-sharing club is an alternative to car ownership: a more affordable and environmentally sustainable way to have access to a car.

“Once they have joined the club, members book the cars online and collect and return the vehicle by themselves. They pay according to how many hours and how many miles they drive. Both the e-bikes and the electric car can be hired per hour, per day or per week, all at very affordable rates.”

Further funding of £635,000 has been secured for the next stage of improvements from Carron to Cragganmore, with construction beginning in July and due for completion by late autumn 2021. Improvements will include upgrading the existing surface, bridge repairs, improved drainage and replacement of information boards and way markers.

This will provide a high quality active travel route to access Aberlour and Craigellachie for a number of smaller settlements, individual properties and businesses.

Chair of Moray Council’s Economic Growth, Housing and Environmental Sustainability Committee, Cllr Graham Leadbitter, said: “Speyside Low Carbon Hub is a fantastic example of where we must focus our efforts in our collective responsibility to tackle Climate Change and to empower people in both rural and urban communities to make sustainable travel choices.

The electric car and electric bikes operated by Moray Carshare have been partly funded by the Moray LEADER programme and by HiTrans.

To book a place on the Led Walk or Cycle ride please contact: janet.macdonald@moray.gov.uk. 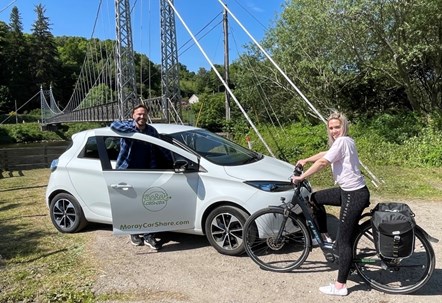