A PLAQUE to commemorate HRH The Duke of Edinburgh’s legacy through his awards scheme launched in Moray was unveiled today, on what would have been the Duke’s 100th birthday.

The plaque and stone was unveiled at Moray Council’s outdoor seating area by its headquarters on the High Street in Elgin. It will form part of a trail, which will feature commemorative stones or plaques at key locations including Gordonstoun, Moray College UHI, and the one already situated at Elgin Academy.

It adds to the rich heritage of the DofE awards scheme being celebrated locally; the 60th anniversary in 2016 saw feature stones designed by Duke of Edinburgh participants unveiled in Fochabers, to capture the attention of those training or on expeditions on the Speyside Way. Alongside this, Fochabers Folk Museum and Heritage Centre agreed to host an archive of the DofE awards programme, which is still available to view.

Moray Council’s former Duke of Edinburgh Manager, Karen Delaney, said: “Moray should celebrate the history and evolving story of DofE as an internationally recognised, challenging, self-development award for young people and the amazing staff and volunteers who support them on their unique journey.”

Helen Anderson, Duke of Edinburgh Director for Scotland, said: “The unveiling of this plaque, the latest in a series commemorating the DofE's rich heritage in Moray, comes at a particularly significant moment, as we reflect on the phenomenal and lasting legacy of our patron and founder and also look to the future with a new 5 year strategy and a remarkable 330,000 young people across the UK actively continuing with their DofE activities.

"These stones are a lasting tribute to a remarkable vision and are testament to the many thousands of young people and our countless exceptional partners, all across Scotland and beyond, who continue the Duke of Edinburgh's legacy."

Leader of Moray Council, Cllr Graham Leadbitter, said: “As a Duke of Edinburgh participant in my teens I know how much the awards mean, and how much effort is required from participants and from staff and volunteers to guide and support them through it. My own experience was fantastic and I gained leadership and teamwork skills, which I use on a daily basis.

“Moray has been at the forefront of the Duke of Edinburgh’s Award since its inception and it’s great to be marking that with a permanent feature highlighting our links with the scheme; and for anyone thinking of participating or volunteering – go for it! It’s a great experience.”

Lord-Lieutenant of Moray, Major General Seymour Monro, said: “This is a very special day-and it would have been HRH Prince Philip’s 100th Birthday.

“It was his participation The Moray Badge challenges at Gordonstoun in 1937 which led on to him launching the Duke of Edinburgh’s Award Scheme in 1956.

“Millions of young people around the World have participated in this wonderful scheme –and it all started here in Moray! Unlike Graham, I only managed to achieve a Bronze Award but I still remember that 48-hour walking and camping expedition to this day!” 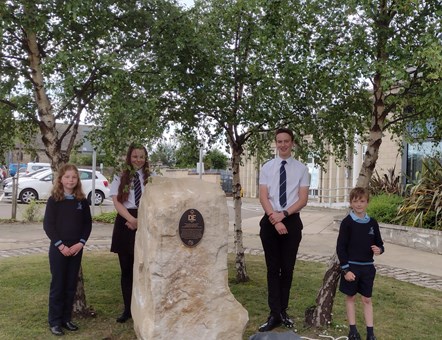