Council officers in Moray are cracking down following a sudden rise in the number of abandoned and untaxed cars.

Council officers in Moray are cracking down following a sudden rise in the number of abandoned and untaxed cars.

The council’s trading standards section and its community safety team are also sharing intelligence in a bid to deal with an increase in the number of unlicensed second-hand car dealers.

There has been a fourfold rise in the number of abandoned vehicles reported to the council so far this year, while there has also been a sharp increase in the number of individuals illegally trading as businesses selling used cars.

Officers have also been dealing with a large number of untaxed and uninsured vehicles being parked in residential streets across Moray.

Trading standards staff and the community safety team are now working together to detect rogue traders and remove offending vehicles from problem areas.

Community safety officer Willie Findlay said vehicles which were already in poor condition were being left on waste ground, in car parks or at the roadside and were having an adverse effect on the amenity of local communities.

“The scrap value of vehicles has fallen of late and the temptation is all too great to dump them or pass them on to unauthorised breakers and back street garages.

“Moray Council will remove these vehicles and the last owner or registered keeper will be liable for any costs incurred.

“It is important, if passing on a vehicle even for no cost, that you complete the V5 document and notify DVLA. Don’t rely on the other person to do it – it is a criminal offence for you not to do it.”

The council’s trading standards manager, Peter Adamson, said warning letters had been sent to a significant number of people in Moray who have been detected running unofficial businesses selling cars.

“We have advised them of the need to get a specific second-hand dealer’s licence and to also make it clear to purchasers that they are in business and that anyone buying a car may have additional consumer rights when things go wrong.

“Where this advice has been ignored, we are also in the process of preparing criminal reports for the procurator fiscal’s office and hope that these will result in court action against the individuals concerned.”

Anyone with information about an abandoned vehicle should contact Moray Council on 01343 543451 or complete the online form at www.moray.gov.uk

If anyone has concerns about a second-hand car they may have bought, or want to report a suspected rogue trader, they should contact trading standards through the Citizens’ Advice consumer service on 03454 040506. 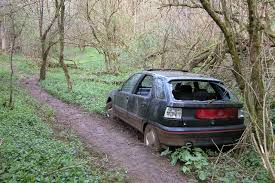