A senior Moray councillor has spoken out in response to concerns expressed by parents at an Elgin school campus where it is proposed to locate temporary accommodation ahead of the opening of a new primary school. High-res pics in related material section free to use. School roll in 1999: 369 2000:333 2001:285

A senior Moray councillor has spoken out in response to concerns expressed by parents at an Elgin school campus where it is proposed to locate temporary accommodation ahead of the opening of a new primary school.

Councillor George Alexander said he had been disappointed at the East End Primary School parent council’s opposition to plans to accommodate the temporary classrooms in a vacant annexe next to the school.

Councillor Alexander said many of the fears raised by parents at consultation meetings earlier this week were “entirely unfounded” and without substance.

Moray Council is currently consulting on a proposal to establish a new primary school to serve Elgin’s fast-growing south-east suburbs.

A catchment area for the new school has already been agreed but until the school is constructed and opened in summer 2018, the council has proposed accommodating pupils in the East End annexe from August this year.

The annexe will be fully refurbished and the ‘temporary’ school would have its own identity with a head teacher and staff, although the playground and dining area would be shared with East End Primary.

Councillor Alexander, who is vice-chairman of the council’s children and young people’s services committee, attended one of the consultation meetings on Wednesday and said he had been “surprised and disappointed” by the negative reaction to the proposal from some East End parents.

He said the council had been accused of seeking to cram in more children than the campus could take.

“To my mind the proposal to accommodate the new school in a building which is currently lying vacant, and only on a temporary basis for two years, makes perfect sense all round.

“The first Primary 1 intake in August would be joined by a new Primary 1 the following year and they would all be getting to know one another by the time they move into their new permanent school building in 2018. From an educational and a social viewpoint, that is surely ideal and provides some sort of continuity.

“However some of the parents at East End seem to think it would lead to friction between pupils from the two schools and create all sort of problems, but they were not able to provide any justification for thinking that. The oldest pupils in the annexe will be in primary 2, going up to Primary 3, and I don’t see children of that age being confrontational.”

Councillor Alexander, a retired teacher, said issues such as sharing the playground and dining and gym facilities were also a red herring.

“Some of the parents were saying that it would be preferable to integrate the pupils into East End rather than have them in a separate school in the annexe. If that happened they would be using the playground, the dining area and the gym anyway, so what’s the difference?

“From what I heard, there was not a single argument put forward by any of the parents which was cogent or persuasive and the fact that no one came up with a better option for accommodating the new school during the two-year transition period spoke volumes for the eminently sensible solution put forward by our education officers.”

A Moray Council spokesman also rejected claims in a flyer produced by the parent council (copy in related material section) that restrictions would be introduced on a section of Institution Road as part of traffic management arrangements around the temporary school.

“No decisions have been taken at this stage in respect of traffic and parking arrangements,” he said. 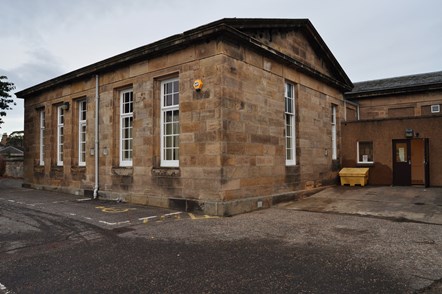