Council officers have negotiated with contractors to bring the cost of the new school down by £400,000. Turf-cutting ceremony is scheduled for March 16th

Construction work will begin on a new high school in Elgin within weeks, after Moray Council regained control of its soaring costs, reports the Press and Journal. Read the full article here

Councillors were dismayed last year after it appeared that delays which set the project back by months had sent costs soaring.

Contractors said stalling the scheme had added £1million to its price tag, inflating it from £28million to £29million.

But during last week’s full council meeting, it emerged that officers had managed to negotiate the sum back down to just over £28million.

Following the costs agreement construction is due to start on site soon, with a turf-cutting ceremony scheduled for March 16th.

Council convener Allan Wright said: “I’d like to thank the officers for the amount of work they put into getting the costs down, any savings are extremely welcome.”

Moray Council’s head of lifelong learning, culture and sport, Graham Jarvis, spent weeks locked in tense talks with contractors and government funding gurus during which he managed to arrange the revised cost.

The authority will now have to contribute just £1.6million to the school’s construction, rather than the £2million previously feared.

The scheme is expected to reach financial close next week.

The council now aims to complete the first phase of the project by next October, which will include the creation of the new school and sports block complex.

The school will be handed over that month, and the second and third stages of the scheme should be finished by June, 2018. 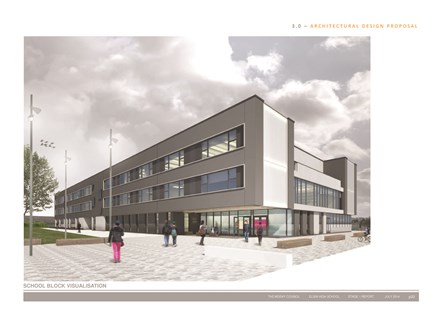