Rationalising office accommodation in Elgin has led to savings for the taxpayer, buildings for community use and easy access for customers.

Thirteen properties across Elgin have been disposed of over the last three years as part of the re-design of council operations, bringing in nearly £600,000 to council reserves.

Staff from these premises have been relocated to the refurbished building in Glover Street, which is the single access point for Moray Council in Elgin. Previously appointments were at a variety of locations in the town, causing difficulties for residents needing services from different departments.

Some of the council properties have been transferred to community use, such as the offices at Moss Street which are now used by the Citizens Advice Bureau, and the Gordon Street property which will be used as a mosque. Former offices at Academy Street are also currently being used as a rehearsal place for the Out of Darkness theatre company

Others have been placed on the open market. Total savings of £348,405 have been made as a result of the disposals.

The new office and access point were created by refurbishing a former supermarket building at a cost of £2.5m, completed over three years ago. The building features advanced energy-saving credentials to keep running costs and the council’s carbon footprint low.

A report on the accommodation savings and other efficiency measures will be presented to councillors on the Policy and Resources Committee on Tuesday.

Corporate director Mark Palmer said that the reduction in office accommodation has made a big difference to the budget and the public.

“As well as the annual savings we’ve generated a one-off receipt of £581,000 by selling off surplus properties,” he said.

“In addition, our service to the public is so much more convenient as the staff at the new building are able to deal with most enquiries of anyone who needs to attend.

“Add to this the energy efficiency of the building and I would describe this re-design as a real success - taxpayers, staff and the environment all benefit.”

Leader of the Moray Council, Councillor Stewart Cree said that the shift from satellite offices to one main building was the right thing to do.

“The move to centralise our offices in Elgin was a fundamental part of our modernisation programme designed to improve services to the public throughout Moray.

“When we embarked on this project in 2010 Councillors had to place a great deal of trust in the officers who had brought forward the proposals. The establishment of our new premises in Glover Street, and the savings and benefits that arise from this, clearly demonstrate that such trust was well placed and reinforces our confidence in future projects of this nature.”

Attached in the related material section is a free-to-use jpeg map with most of the disposed-of properties marked. 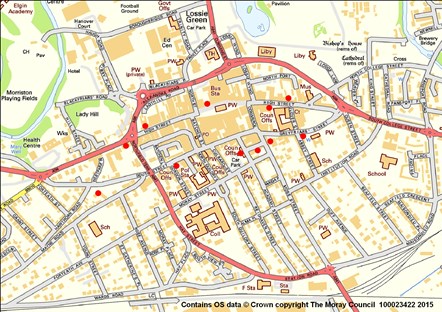