The first teacher to take advantage of an offer of free accommodation by a leading Moray house builder is preparing to move in for the start of the new school session.

The first teacher to take advantage of an offer of free accommodation by a leading Moray house builder is preparing to move in for the start of the new school session.

Gillian Elliot has been handed the keys to the two-bedroom flat in Elgin where she will be able to live rent-free for the next six months.

It follows a unique partnership agreement between Moray Council and Springfield Properties in the hope of attracting more teachers to the area and easing the council’s teacher shortage.

Springfield has placed 10 of its new properties at the council’s disposal in what is believed to be the first arrangement of its kind in Scotland.

At one point last year Moray had more than 70 teaching vacancies in its 53 schools, although the situation has since eased somewhat.

Springfield chairman Sandy Adam stepped in with the offer of six months’ free accommodation as an incentive after councillors were warned that there was a danger of pupils being sent home because of a lack of teacher cover.

Gillian, 23, takes up her teaching post in the technical department at Milne’s High School in Fochabers on Monday after two years of teaching in Glasgow.

She said the offer of rent-free accommodation had been a major factor in deciding to apply for the job.

“It was what drew me to the post,” she said. “Starting a new job is daunting enough in itself without the additional pressure of finding somewhere to live. It is a great opportunity to get teachers to come to the area.”

Moray Council’s director of education and social care, Laurence Findlay, said there had been a significant increase in the number of applicants for teaching posts in Moray since the council entered into the agreement with Springfield.

“Previously we were getting just a handful of applications for some posts – now we are typically getting well into double figures.

“Although Gillian is the first to take up the offer of accommodation, there has certainly been a very encouraging rise in the number of teachers applying for posts in Moray and that seems to have coincided with Springfield’s very generous offer of free accommodation for six months.”

Springfield chairman Sandy Adam said: “We are delighted to welcome Gillian to Moray and to her new Springfield home. It’s good to hear that the number of teachers applying for posts in Moray is rising.

“Moray is a great place to live and work and we have extended the offer until Christmas with the intention of helping more teachers to make the move.” 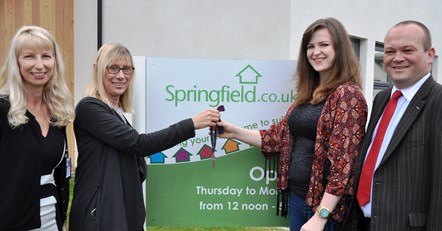