Lighting up Red for the Scottish Poppy Appeal

LANDMARKS in Moray are being illuminated in colour as part of Poppyscotland’s ‘Light Up Red’ campaign.

The Plainstones fountain on the High Street in Elgin will glow red every night until 14 November, and the Wolf of Badenoch sculpture on Armistice Day, to mark the annual appeal.

Convener of Moray Council, Shona Morrison, said: “I’m pleased once again that we can show our support for the Scottish Poppy Appeal by lighting up red. It’s a small gesture but sees us join a vast network of venues across the country and that has a big impact on raising awareness for the vital work of Poppyscotland.

“Last year, sadly, street collections for the appeal were badly hit by the pandemic so it’s even more important we do all we can this year to support the appeal and its life-saving work for the Armed Forces community here in Moray, and across Scotland.”

Gordon Michie, head of fundraising and learning at Poppyscotland, said: “Last year cash donations to the Scottish Poppy Appeal were down 28% because of the pandemic but, despite this, Poppyscotland’s life-changing support to the Armed Forces community continued uninterrupted.

“It's fantastic to see local businesses and landmarks across Moray taking part this year, and I want to give great thanks to them for paying this tribute to Scotland’s Armed Forces community. To see the country light up red during this Remembrance period will be even more poignant as, 100 years on, the Poppy Appeal remains as important as it ever has been.” 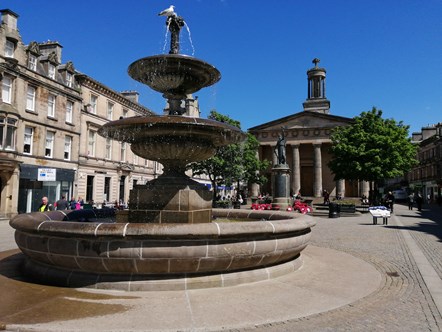