More than 90 Letters of Commendation were issued in October to various organisations and individuals, expressing thanks for everyone’s extraordinary contributions to their communities during the pandemic. This second round sees a further 90 worthy recipients acknowledged.

Recipients range from some of the emergency services to organisations supporting businesses and jobs; from education staff to teachers; from Rotary clubs to supermarkets and shops; and to all the very many individuals who have gone above and beyond for others to support them through the crisis. No one on the first list was eligible this time round.

Andrew Simpson said: “It has been humbling to read the nomination citations. So many people have looked after others in their communities, and have helped by keeping their businesses going to provide food and other items for people.

“I particularly want to thank all the teachers and support staff who have done their best to encourage their pupils through home-schooling and now back in the classroom. It has been a most testing time unlike anything we have experienced before.

“Others gave outstanding support during the recent gas incidents in Keith and the surrounding area.”

Seymour Monro added: “I’m grateful to those who had raised funds so that essential food, clothing and finance were available to support those in special need.  Andrew and I - as members of the Lieutenancies’ Moray Emergency Relief Fund team - are proud of the generosity of the people and businesses in Moray.

“I would also like to thank everyone involved in the delivery of the vaccines: the doctors, nurses, administrative staff, members of the Armed Forces and the many volunteer stewards.”

A recipient, Craig Robertson on behalf of Business Gateway, said receiving the commendation “is a real boost”.

“This last year has been a rollercoaster for businesses, and we’ve been on that journey with them. They’ve shown a huge amount of resilience and we’re proud to have played a role in supporting them.”

Both Lord–Lieutenants agreed that the ongoing nature of the pandemic would mean that there would be another tranche of letters in the middle of the year. Whilst acknowledging that there are ‘unsung heroes’, they congratulated all of those receiving Letters of Commendation for this well-deserved honour.

Recipients listed below and also available on Moray and Banff’s respective Lieutenancy websites.

Letters of Commendation awarded to: 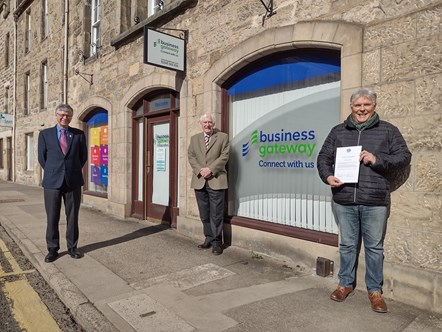