INTERESTING artefacts from current life were placed in a time capsule and buried yesterday (11 January) for future finders by pupils from Lossiemouth High School.

The stainless steel capsule was buried at the centre of the new football pitch, containing a school tie; a newspaper; an Apple iPhone; wire earphones; Irn Bru 1901; a picture of RAF Lossiemouth aircraft; a letter to the finder; and a USB stick containing a Christmas song, pictures, popular songs throughout 2021 and the latest primary 7 welcome video.

As well as the stories and artefacts, a bottle of hand sanitiser, a face covering and a lateral flow test strip were placed in the capsule – items which may be a distant memory for those digging up the capsule in 2072. The location of the capsule has been registered with The International Time Capsule Society and can be opened in 50 years.

Pupils were surveyed before the pandemic and have carefully considered the items included to capture the history of the recently-replaced school building, and to give people in the future an idea of what life was like for school pupils in Moray in 2021. The initiative, run by lead contractor Balfour Beatty, forms part of the projects community benefits plan to involve pupils in the journey of the construction of their new school.

Lossiemouth High School Head Teacher, Janice Simpson, said that the burial of the time capsule has provided pupils with some excitement during what has been a challenging time for all.

“We were delighted to be asked by Balfour Beatty to be part of its time capsule project and the pupils were eager to have the opportunity to select items to bury for children and young people to uncover in the future. It's important that what they view as current life at Lossiemouth High School is captured and I found it very interesting to see what they had chosen.

“Our aim is to ensure that every child leaves the school with the skills, knowledge and confidence to succeed in their next steps, and it’s reassuring to see that they’re still over the moon with the new building and facilities.”

Chair of Moray Council’s Children & Young People’s Services Committee, Cllr Sonya Warren, said that the new school building is a significant and transformative project for Lossiemouth and the burial of the time capsule is an exciting way for the pupils to celebrate.

“There are some really interesting documents and artefacts stored inside that I’m sure will be fascinating to unearth in 2072.  The school grounds already hold many happy memories for local children and it’s been a pleasure to help them leave their own legacy and history in the same place they have enjoyed growing up.”

Ewen Fowlie, who led the project for Moray Council’s development partner, hub North Scotland, said: “Burying a time capsule on the site of the new school football pitch is a great idea and a wonderful way to commemorate a brilliant project. I am sure whoever digs it up in the future will find the contents fascinating.”

Jim McCluskie, Senior Project Manager at Balfour Beatty said: “We were delighted to donate the time capsule to the students of Lossiemouth High School, following the successful completion of their new building and teaching facilities last year.

"It was a pleasure to watch pupils come together to share these important memories, capturing the history of the school and leaving behind treasures for future generations."

Pupils and staff moved into the new £42million high school building in April last year which incorporates community facilities, a swimming pool, library, games hall and 3G sports pitch in an area the size of Trafalgar Square.  The project was developed and delivered by Hub North Scotland with Balfour Beatty undertaking the construction.

Phase 3 works are underway on site with the demolition of the old high school building and construction of a new external all-weather sports pitch. 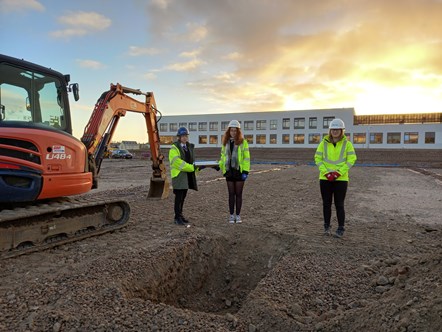