One of Moray Council’s Education Support Officers, Maxine Garson, has won industry recognition for her outstanding contribution to countryside education.

The Royal Northern Countryside Initiative (RNCI) has awarded Maxine the John Telfer Trophy, an annual award presented to an organisation or individual that has helped the RNCI achieve its aim. That is to help children and their teachers in the North East of Scotland develop a greater understanding of farming, food production and the working countryside.

Maxine, who joined Moray Council in 2016, has been instrumental in developing the council’s Science, Technology, Engineering and Maths (STEM) skills policies and has a particular affinity with agriculture and countryside careers. Maxine joins Highland Council in a similar role next term.

“I grew up on a farm in Orkney so I know first-hand how rewarding working in the countryside can be and the sheer amount of skills required to keep our rural industries going.

“I’m flattered to be given this recognition from the RNCI and accept the John Telfer Trophy on behalf of all my colleagues involved with Moray Skills Pathways, who are a great team and so passionate about giving our young people in Moray the best opportunities we can.

“It’s a nice way to end my time with Moray Council and I thank all the organisations and businesses who have supported the work I’ve enjoyed doing for the last five years through the Moray Skills Pathway.”

Alison Johnston, Project Manager at RNCI, added: “Maxine has always gone above and beyond to involve the RNCI in some amazing projects in Moray. Including the RAF STEM event in 2019, which saw us welcome over 1200 children to tell all about STEM, food and farming. Along with the Grow Your Future event at Dipple we have seen Maxine’s dedication to raising countryside awareness in Moray, which makes our job so much easier.” 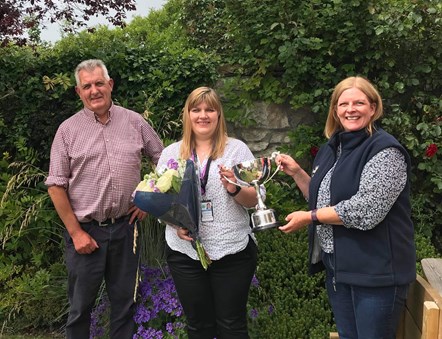