A fund has been launched to provide financial relief to people in the Moray Council area suffering severe hardship, illness or poverty as a result of the Coronavirus crisis.

Described by its trustees as a safety net of last resort, the Moray Emergency Relief Fund is intended for those who have not been helped sufficiently by measures available from the UK and Scottish governments and Moray Council.

The fund is registered as a charity and was formally launched by Andrew Simpson, Lord- Lieutenant of Banffshire, and Maj Gen Seymour Monro, Lord-Lieutenant of Moray, today.

The charity will depend on donations by organisations, businesses and individuals for its initial funding as COVID-19 restriction prevents fundraising activities being held.

Seymour Monro said: “Andrew Simpson and our fellow trustees are confident that The Moray Emergency Relief Fund will provide vital support to many people in Moray during this very difficult time.”

“It will complement the efforts of the Governments, Moray Council and charities working in the area.”

Andrew Simpson urged businesses, organisations and individuals to donate as generously as possible to support those in Moray facing difficulties.

“I am so pleased to be able to say that we have received some donations already.

“The fund is a designed for those who have a particular problem facing them during this pandemic for which they can find no solution,” he said.

“It is a safety net of last resort that we feel has to be there in the unique circumstances we find ourselves in.”

Cash deposits may also be made in person at any Moray branch of the RBS. Whichever means used by those making donations, it is important that they complete a Donation Form so that the charity can send its thanks and process any Gift Aid agreement. Donation forms will be available on the Moray Council website under the heading ‘Moray Emergency Relief Fund’ and in the local press.

Application Forms for a grant may be downloaded from the Moray Council website again under the heading ‘Moray Emergency Relief Fund’. Application forms will also be in local press and on their websites.

Completed application forms may be sent by post to: The Chief Executive’s Office, Moray Council, Council Office, High Street, Elgin, IV30 6BE. These will be forwarded to the trustees. Or they may be e-mailed directly to the trustees. The trustees will consider applications on a regular basis.

The trustees would like to take this opportunity to thank all the staff of NHS Grampian and of Moray Council, the members of the Armed Forces, all the community organisations and many volunteers, shop and supermarket staff who are working so tirelessly on behalf of everyone in Moray. 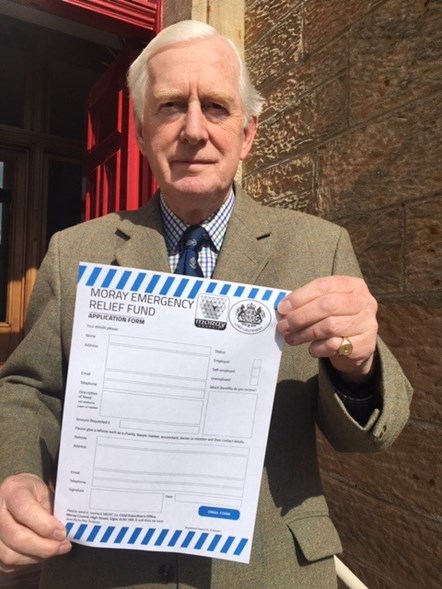