CORONAVIRUS-related applications to the Moray Emergency Relief Fund will not be accepted after the end of this month.

During the past 18 months over 620 applications to the fund have been processed. Many applicants applied on multiple occasions meaning that some 1,300 grants have been made totaling £240,000. These have been mostly to help with fuel and food costs, rent payments, basic household goods, transport, and also for IT for remote learning in the early months.

However very few applications have been received over recent weeks by the Moray Emergency Relief Fund (MERF), therefore the trustees have decided to stop accepting Coronavirus-related applications on 30 September. The fund will remain in existence to deal rapidly with any future emergencies in Moray.

The establishment of the charity was proposed by Major General Seymour Monro, Lord-Lieutenant of Moray, and Mr. Andrew Simpson, Lord–Lieutenant of Banffshire. Launched on 10 April 2020, just after the first lockdown, an appeal for funds quickly brought in generous donations from individuals, businesses, clubs and the RAF. The trustees had thought they might raise £100,000; in fact after nearly 18 months some £280,000 has been donated.

Applicants, with the support of their referee, submitted a simple application form online which assessors from both Lieutenanices discussed. Successful grants were usually approved within 36 hours, faster than a typical grant application, giving applications emergency access to funds.

Chairman of the MERF, Lieutenant Colonel Grenville Johnston, former Lord-Lieutenant of Moray and one of the assessors, expressed his thanks to all the donors.

“We have been overwhelmed by the generosity of so many people, businesses and organisations in Moray. People have really understood what an emergency this has been for many struggling families and businesses. We are immensely grateful to all our donors.”

Andrew Simpson, Lord-Lieutenant of Banffshire and another assessor, praised all the public service and charity staff.

“We have received great assistance from Moray Council and NHS staff, and from many charities and community groups across Moray to help us make the right judgements for people. They have just been tremendous.”

Major General Seymour Monro, Lord-Lieutenant of Moray and another assessor said the fund had offered Moray residents help and hope during the pandemic.

“Although the trustees have agreed to close the Moray Emergency Relief Fund in relation to the Coronavirus emergency; it will be there for future emergencies.

“We have also become very aware of the deprivation and child poverty which exists in Moray, and we will try to do what we can to help reduce poverty in our Lieutenancies.”

Convener of Moray Council, Cllr Shona Morrison, said: “At a time of anxiety and uncertainty for so many across Moray, the MERF provided a lifeline to those most in need of assistance. With the generous contributions of business and individuals, the fund boosted Moray's resilience in the face of complete unknowns due to the pandemic. I'm privileged to be a Trustee and grateful to the Lord Lieutenants and all others involved in establishing, maintaining and administering this fund.”

Richard Lochhead MSP, said: “The Moray Emergency Relief Fund has been a vital resource for many people locally who have found themselves in financial crisis over the last year or so.

“I commend everyone involved for their efforts in supporting our community through the pandemic.”

Douglas Ross MP, said: ““The Moray Emergency Relief Fund has been a great success due to the generosity of so many and the time and dedication put in by the assessors and all involved; ensuring those most at need got the support during extremely difficult of times.

“It was an honour to be asked to be a patron and while the fund is closing to Coronavirus-related applications, it has helped so many people and will be reactivated should we ever need it in the future.

“When the Lord Lieutenants of Moray and Banffshire suggested the fund, I never expected it to raise so much money or help as many people as it did.  I know many of the claims were harrowing for the assessors to deal with and Grenville Johnson and his team of volunteers deserve our thanks for their tremendous efforts.” 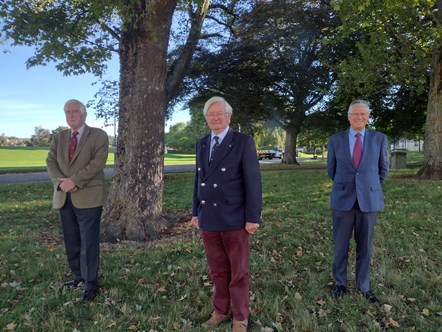