Moray has the third highest recycling rate in Scotland

RECYCLING rates in Moray are at their highest level since 2016, according to new data released by SEPA.

These latest figures confirm Moray’s ranking as third in Scotland for recycling, after East Renfrewshire and Angus Council respectively. There was just 0.1% between Angus and Moray councils recycling rate.

It also marks another consecutive year of Moray householders producing less waste, at 0.49 tonnes per person, down from 0.50 tonnes in 2018. This goes against the national trend, which saw a 1% increase in household waste across Scotland .

All of this is excellent news, says Moray Council’s Waste Manager, Mike Neary.

“Everyone in Moray has a part to play in recycling more and sending less to landfill, and their efforts are celebrated in these latest figures.

“It affirms what we see every day – our residents’ commitment to recycling, in turn reducing our environmental impact and saving thousands of taxpayers’ money on landfill tax.

“I’m particularly pleased to see that we continue to reduce the amount of waste produced, which is the one of the most effective ways to reduce our carbon footprint. Moray is bucking the national trend in this respect, and it’s a great outcome for the area.

“We’ve seen this positive approach continue this year, despite the disruption caused by the pandemic. Our residents continue to be recognised by SEPA as among the best-performing in the country.

“I want to also thank our hardworking refuse crews, who undertake millions of bin collections every year, and the waste support staff. Without this high-quality service for our residents we wouldn’t be among the top authorities in Scotland for recycling.” 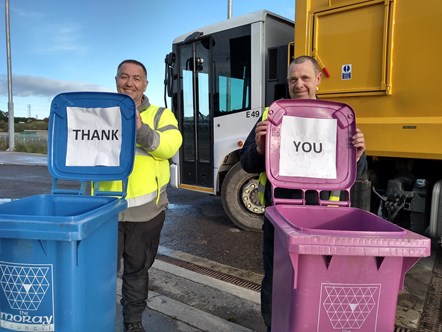 Jim and Andy say thanks 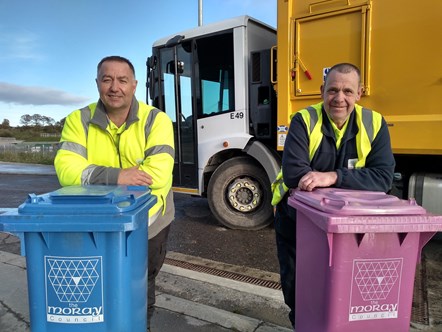