Moray signs up to energy-from-waste initiative

Moray councillors have taken an important step towards joining two other north-east authorities in building a facility which will produce energy from household waste.

Moray councillors have taken an important step towards joining two other north-east authorities in building a facility which will produce energy from household waste.

They agreed to approve the terms of what will be the first stage of an agreement with Aberdeen City Council and Aberdeenshire Council to develop the plant.

New regulations will place a ban on organic waste going to landfill after 2020, leaving Moray with no option but to find an alternative to sending its non-recycleable waste to the council’s landfill site at Nether Dallachy.

Councillors were told that all three north-east councils had concluded that their interests would best be served by collaborating on a joint energy-from-waste facility in Aberdeen.

At this stage the indicative costs to build the plant are £180million, of which Moray’s share would be £25million.

That would cost the council £1.8million a year in loan charges for 25 years.

However, that is less than the £2.25million the council currently sets aside annually for landfill tax. 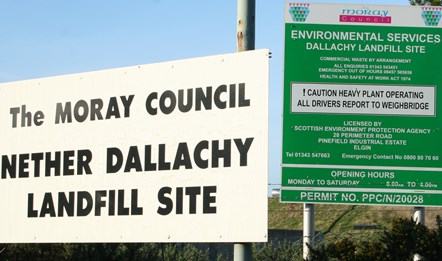 Moray signs up to energy-from-waste initiative