MORE THAN 16,000 postal voting packs have been issued to Moray voters.

These will begin to drop on doormats from today (15 April) and voters are encouraged to complete their postal vote and return it as soon as possible.

A second drop of postal voting packs will take place later this week, arriving in homes early next week.

Moray’s Depute Returning Officer, Moira Patrick, said: “Thousands more voters in Moray have chosen to vote by post than would normally, for the Scottish Parliament election on 6 May.

“We’ve bolstered our postal vote processors to match this demand – and voters can help by fully and carefully completing their postal votes and returning them as early as possible. Bear in mind that Monday 3 May is a bank holiday and mail services are not operating.”

Once completed, the ballot paper and postal vote statement should be placed in the envelope and returned to make sure that it is received in good time. Postal voters can make use of Royal Mail’s priority post boxes, detailed on their website. Postal ballot papers must be received by the returning officer by 10pm on Thursday 6 May at the latest.

More information is available on Moray Council’s website about the upcoming Scottish Parliament election, and a step-by-step guide explaining how to complete a postal vote. 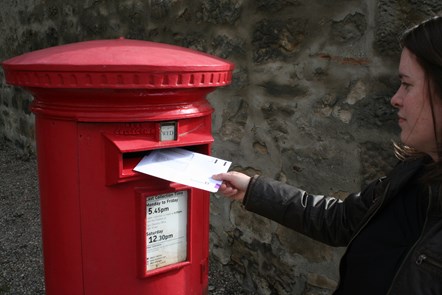