During lockdown it will be the setting for around 50 keyworker and vulnerable children, with the whole school moving into the new building when restrictions allow.

The school can accommodate more than 400 pupils, including ASN provision for up to 12 pupils, with space for 40 children in the nursery.

Pupils can enjoy an external roof terrace and outside play areas featuring a secure area for ASN pupils, a multi-use games area (MUGA) and secure play area for nursery, as well as an outdoor classroom, orchard and planting to attract wildlife with bug hotels around the school grounds.

“With the significant development in the area, it’s vital that we have a modern learning environment to support our pupils and take its place in the community. After a tough year for learners, to come back to new classrooms, in a new purpose-built school, will be such a boost.”

Head Teacher, Fiona Stevenson, said: “We’re thrilled to be in our new school. It’s been a meaningful experience for the pupils to watch their new school being built, and I’m looking forward to the return of all our learners so we can enjoy the fantastic space and facilities here at Linkwood.”

Ewen Fowlie, the hub North Scotland project director for the school development, said: “It is great to see Linkwood in use, even on a reduced scale, and playing its part in the community in the current restrictions. It is a fabulous building and when things return to normal, it will play a major role in south Elgin life for generations to come.” 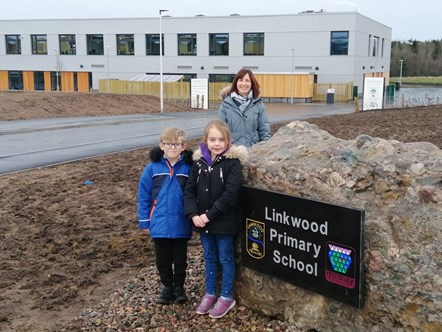