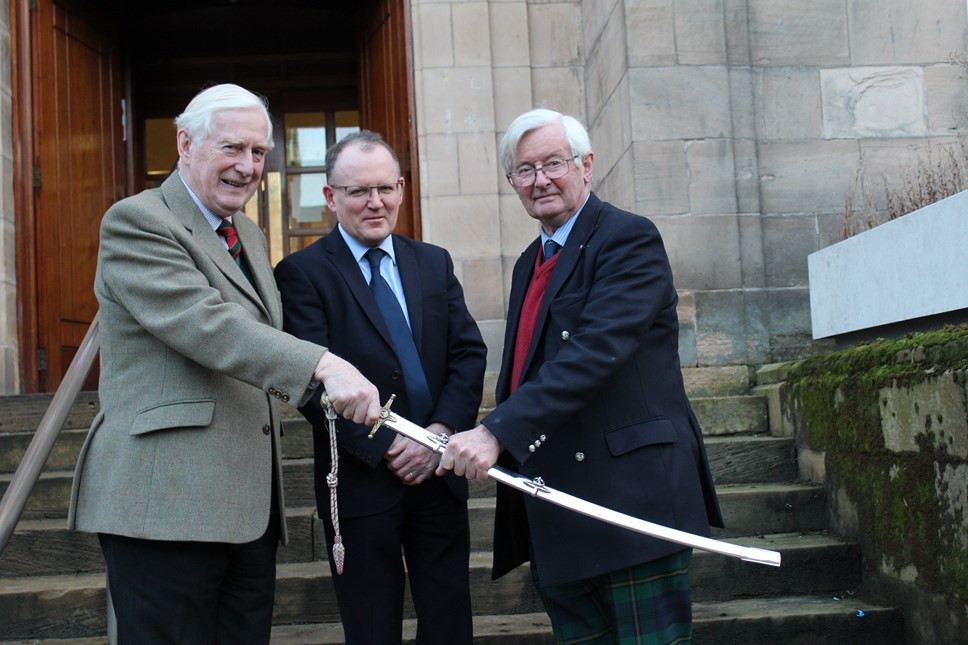 Moray’s new Lord-Lieutenant was sworn in yesterday accepted the sword of office from his predecessor.

The former Commander of the 1st Battalion, Queen's Own Highlanders, Seymour led the successful multi-million pound campaign to restore the fortunes of the Highlanders’ Museum in Fort George, and championed the Highland Military Tattoo there for five years. He is also a former chair of the Highlands and Islands Prince’s Trust and of the Findhorn, Nairn & Lossie Fisheries Trust. He is currently chair of the Northern Meeting Piping Trust and President of a number of Forres-based organisations, including the Forres Pipe Band, Forres in Bloom and the Royal British Legion. He is also on the Leanchoil Hospital steering group.

He said he was honoured and excited by his appointment.

“Following Grenville’s example, I will do my best to represent Her Majesty the Queen and to serve the people of Moray,” he said.

“The Lieutenancy has a strong team of deputies, all of whom I have enjoyed working with as a deputy myself. Along with my wife, Angela, I look forward to making many more friends in Moray over the next five years.”

The retirement of Lt Col Johnston was announced recently at a Lieutenancy dinner, where he was made a Freeman of Moray.

He said: “I am delighted to be handing the Lieutenancy to Major General Seymour Monro.

“He has been a great supporter to the Lieutenancy. He also has been much involved in Moray matters over many years. I wish him well in this appointment and I know he will have as much pleasure as I have had in meeting the people of Moray on the numerous activities and events we enjoy.”