Covid Commendations are being given to organisations, voluntary groups and individuals who have gone above and beyond for the sake of others during the C-19 pandemic.

The Lords-Lieutenant of Banffshire and Moray have created the new Commendations to recognise nearly 100 community members and groups across the area.

This is the first time such Letters of Commendation have been awarded, and the area’s Lieutenancies say they felt compelled to publicly recognise the exceptional efforts made by so many.

One recipient, Ian McCallion of the Buckie Trawler fish van, was presented with his Commendation at his usual pitch in the B&Q car park in Elgin by both Lords-Lieutenants.

During the lockdown Ian collected food and provisions for the Moray foodbank, and delivered free essential supplies to NHS staff who had no time to go shopping after long shifts.

Deputy Lieutenants, councillors and some council officers submitted nominations to a joint Lieutenancy honours subcommittee, chaired by the Lords-Lieutenant of Banffshire and Moray, Andrew Simpson and Seymour Monro.

Andrew Simpson said: “We have all been impressed by the way so many groups and individuals have come together to deliver support to their communities, especially to those who have been vulnerable or isolating.

“Public organisations such as the NHS, police and Moray Council have worked tirelessly on behalf of the people of Moray throughout.

‘We would also like to thank the supermarkets, retailers and pharmacists who have been under great pressure from the start of the lockdown and have given exceptional service.’

Lord Lieutenant for Moray, Maj Gen Seymour Monro, said it has been humbling for the committee to read the citations.

“We will almost certainly be having a second round of these Letters of Commendation in the middle of next year”, he said.

“We would encourage people to contact their local deputy lieutenants or councillors with suggestions.

‘I would also like to remind people that they can make nominations for a UK National Honour –details are on the Cabinet Office website and guidance is on our two Lieutenancy websites: www.lordlieutenantmoray.co.uk and www.lordlieutenantbanffshire.co.uk

“On behalf of our communities, we give our sincere congratulations and thanks to all those who are receiving these commendations”. 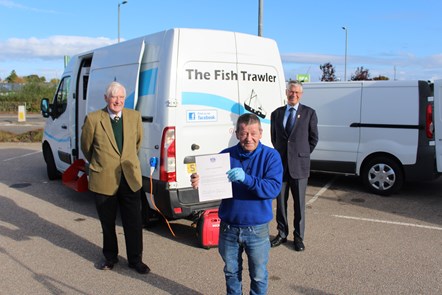