Moray councillors today agreed to a rent-free lease of three business units to help the Moray Supports Refugees group to continue its work.

Moray councillors today agreed to a rent-free lease of three business units to help the Moray Supports Refugees group to continue its work.

The lease of the units at the Chanonry Business Centre in Elgin has been granted to tsiMoray which has been working closely with Moray Supports Refugees over the past few months.

Councillors on the Policy and Resources Committee unanimously agreed to waive the £11,000 a year rent on the units, and fund all legal costs associated with the lease.

The council-owned units - where the keys were handed over to the support group by council leader Councillor Stewart Cree towards the end of last year (pictured) - were used initially for the storage and distribution of donations for families arriving in Moray under the Syrian Vulnerable Persons Resettlement Scheme.

Four Syrian families have resettled in Moray after being given accommodation in Forres.

The three units will now be used for the sorting and distribution of humanitarian aid to refugees across Europe.

In addition to occupying the units rent-free, tsiMoray’s charitable status entitles it to a mandatory award of 80% rates relief. 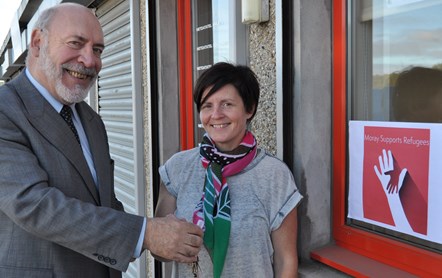