Pupils had expressed their wish to fly the rainbow flag at secondary schools, and this was endorsed by Moray Council’s Equalities Champion, Cllr Shona Morrison.

Under the Curriculum for Excellence, wellbeing, equality and inclusion is promoted, and as part of the self-evaluation by pupils in ‘How good is OUR school?’ high quality practice includes a school community understanding, valuing and celebrating diversity, and an encouragement to challenge discrimination.

Head Teacher of Speyside High School, Tricia Goodbrand, said: “We pride ourselves on an ethos of care, and to be able to fly the Pride flag in a central part of the school underlines our commitment to inclusivity and support for all within the LGBTQ+ community, and everyone in the Speyside High School community.”

S6 pupil, Zoe, said: “My time at Speyside has ended with me seeing a massive Pride flag hanging in our school, I feel noticed. Equality means more than passing laws. The struggle is really won in the hearts and minds of the community, where it really counts.

“It’s important for us as a community to recognise everyone no matter their gender, sexuality, religion or race. I’m happy knowing that my school is on the right road to equality.”

“I’m incredibly proud of the young people who have organised the flag flying and look forward to seeing pictures from around Moray.”

Chair of Moray Council’s Children and Young People’s Services Committee, Cllr Sonya Warren, said: “I’m thrilled to see schools flying the flag; it’s so important for young people to feel included and safe, and to know it’s ok to be who they are – within our schools and wherever they are in life.”

The flag will also be hoisted at Moray Council’s HQ in Elgin to mark the celebration of Pride month. 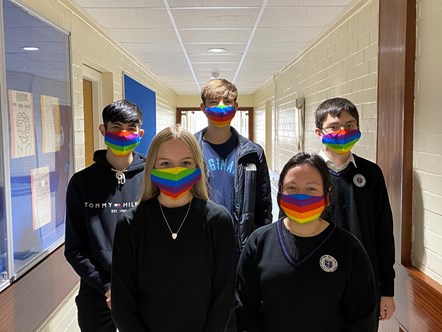