The developments are included in the £100m MGD package, which is backed by both the Scottish and UK Governments, who are contributing £32.5m each.

The tendering stage is a vital part of the preparatory works for the £31m Cultural Quarter, and invites bids for internal and external improvements, rebranding and extension to Elgin Town Hall to support it becoming a regional entertainment and creative industries centre, helping create an evening economy in Moray. The refurbishment and extension of Grant Lodge to become a food and drink heritage centre will signpost to many of the tourist attractions in Moray, and showcase improvements to Cooper Park.

Also being commissioned is the detailed design of a first phase of housing at Dallas Dhu, south of Forres. This forms part of the £7.5m Housing Mix Delivery project, which supports delivery of affordable housing throughout Moray, incorporating cutting-edge health and well-being technology into homes.

Tenders are to be submitted through Public Contracts Scotland by mid-March.

Leader of Moray Council, Cllr Graham Leadbitter, said: “Going out to tender is an exciting milestone in getting these projects shovel-ready for works to start.

“The work being commissioned requires consultants to engage and consult widely with the community as the detailed designs evolve and it’s anticipated that detailed planning and listed building consents for Elgin Town Hall and Grant Lodge will be submitted before the end of 2021.

“We’re seeing real progress on the Cultural Quarter in particular, which will play a key role in the Masterplan for Elgin City Centre, to be published in March. This will invite discussion on a range of potential projects to drive investment in the City Centre, provide facilities and employment opportunities, and bring empty spaces and buildings back into use.”

Cabinet Secretary for Transport, Infrastructure and Connectivity, Michael Matheson said: “Across Scotland we have committed more than £1.9 billion over the next 10 to 20 years to City Region and Growth Deals and additional investments.

“This announcement represents another milestone in both the Cultural Quarter and Housing Mix Delivery projects as part of the Moray Growth Deal. The Scottish Government is investing up to £32.5 million in the Moray Deal, this will unlock investment and drive inclusive and sustainable economic growth across the area.

“Investment in these projects will help create affordable housing, boost the region’s tourism offer and improve the cultural offering for local people. These projects will make Moray an even more attractive place to live and work, and support one of the Deal’s key ambitions of attracting and retaining young talent.

“The UK Government has committed £32.5 million to the Moray Growth Deal, including up to £3.5 million for Grant Lodge.

“Across Scotland we’re investing more than £1.5 billion into growth deals, which will help us to build back better from the pandemic.”

Stuart Black, HIE’s area manager in Moray, said: “The Cultural Quarter will breathe new life into two much-loved venues in Moray and give the area’s rich cultural offering a new platform. It will also support both tourism and creative industries, important sectors in Moray that have been hit particularly hard by the pandemic. It’s great to see the project reach this stage and look forward to work getting started.” 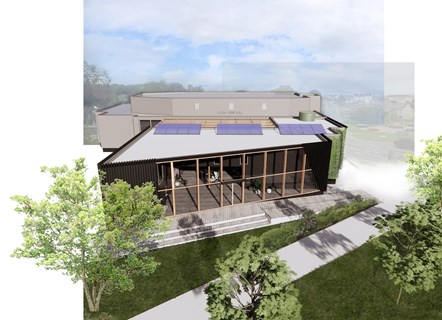 Artist impression of how Elgin Town Hall could look