A bus service linking Tomintoul and Grantown-on-Spey could be set to continue over the winter following a successful trial.

A bus service linking Tomintoul and Grantown-on-Spey could be set to continue over the winter following a successful trial.

An average of 10 passengers per journey have used the weekly return service since the six-month trial was introduced in April.

Prior to the trial there was no public bus service on the 13-mile route between Tomintoul and Grantown.

The service is run by Moray Council’s public transport unit and councillors are now being asked to approve its continuation during the winter months.

A report to the council’s economic development and infrastructure services committee states: “The service has operated every Wednesday with passenger loadings at an encouraging level for such a remote location.

“These figures compare very favourably with other services of a similar nature operating elsewhere in Scotland.

“In order to maintain consistency and foster growth for forthcoming years, it is proposed to continue to operate this service to the existing timetable throughout the winter months. While demand may well reduce, it is important that the service is allowed to become established as a constant feature in the area.”

The committee is also being asked to approve a proposal which would see a minibus service which transports day service clients to and from the Keith Resource centre from Speyside made up to a public bus service.

It would depart Dufftown at 9am on Tuesday, Thursday and Friday and return from Keith at 4.30pm, continuing on to Tomintoul on request. 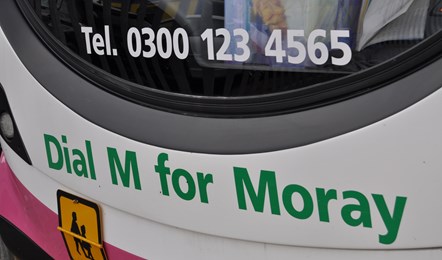