YOUNG musicians from the Moray Music Centre topped their categories and scooped two trophies at the Inverness Music Festival at the weekend.

Members of the Junior Wind Band and Senior String Orchestra range from Primary 5 pupils up to S6, covering pre-Grade 1 level to post-Grade 8. The festival returned as a ‘blended’ event this year, with performances from Moray recorded and submitted virtually to the adjudicators.

The Senior String Orchestra was awarded a distinction with 88 marks for their rendition of Anthem, from Chess, and Zoosters Breakout from Madagascar. This orchestra has 30 strings players, and their performance was conducted by Moray Council’s Principal Teacher of Music Instruction & Performance, Alexander Davidson, alongside experienced cellist and volunteer, Kirstin Mustard.

Both ensembles are part of the Moray Music Centre, which returned to in-person rehearsals in August 2021 after a year’s hiatus due to the pandemic. Tickets for their first in-person concert since Spring 2020, to be held on Saturday 12 March at St Giles Church, are available to purchase online or on the door on the day.

Moray Council’s Principal Teacher of Music Instruction & Performance, Alexander Davidson, said: “After a long and challenging period of disruption to learning and music-making, it’s fantastic to see Moray’s young musicians achieving their very best again, in and out of lessons and rehearsals.

“Winning at the Inverness Music Festival helps recognise these achievements, highlighting the commitment and determination of our young people. A win for Moray! Thank you to instructors, families, schools and communities for the ongoing support.

“We’re working hard behind the scenes to plan for an expansion of the Moray Music Centre, with the aim of offering more young musicians opportunities to participate. Registration will open for the 2022-23 session during term four of this school year.” 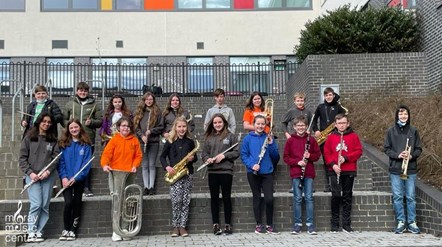