AN UBER-style on-demand bus service and a project to engage children aged 3 – 8 in STEM secured more than £2m of Moray Council funding today.

Both projects are part of Moray’s Growth Deal, totalling over £100m investment into the local economy with funding from the Scottish and UK governments, as well as public and private sector contributions.

Bus Revolution will build upon Moray Council’s award-winning on-demand bus service, providing public transport which meets the needs of the region’s largely rural economy and converting the fleet to low-carbon vehicles. Funded through £4m of Scottish Government funding and £300k from Moray Council, it aims to increase the numbers using public transport, reduce the number of people facing transport barriers to employment, education or recreation, and reduce the environmental impact of transport in the area.

It could see a fully-electric service in operation between 4am and midnight (Mon – Sat) and 7am to 10pm (Sun), potentially with facilities like onboard Wi-Fi and an app to allow customers to book as little as one hour ahead, and track vehicles.

Separately, councillors approved £1.3 million investment into a unique approach to encouraging young leaners to participate in science, technology, engineering, mathematics and digital (STEM), creating a positive change in culture and attitude towards STEM. Further funding of £3.5 million from the Scottish Government has been pledged.

A pilot to introduce an ELC STEM Hub at RAF Lossiemouth’s Childcare Centre will be trialled, and there’ll also be bespoke STEM facilities in each of Moray’s school areas created to enable inter-generational learning. Each area will influence facilities which best suit their needs, and there will also be a £1 million mobile facility to allow the latest innovations to travel around Moray to benefit young learners and encourage interest in STEM subjects.

The Growth Deal’s STEM initiative is unique, recognising that for positive attitudes to be embedded around STEM, the culture change needs to begin at a pre-school and then be sustained through primary and secondary school. With 20% of employment in Moray in manufacturing, automation poses a high risk to this and the future workforce must be prepared to adapt to these changes, which the STEM initiative will address from an early stage by creating a confident workforce trained and qualified in STEM disciplines.

This workforce will then be able to benefit from the opportunities of technological change and earn salaries that reflect the skilled nature of their jobs, in turn increasing the level of disposable income in the region and showcasing a well-trained workforce, making Moray a place where businesses look to locate and invest.

Leader of Moray Council, Cllr Graham Leadbitter, said: “We’re making real progress on these exciting projects which will play such an important role in Moray’s future and, in the short to medium-term, our recovery from the pandemic.

“We’re anticipating that, subject to the Deal being agreed, the Bus Revolution project could be on the road later this year, while STEM will follow in a few years to allow for considered planning and engagement with partners and the community.

“While the Growth Deal is a long-term programme spanning the next 10 years, the benefits will last for generations so it’s vitally important we do the groundwork in advance so we’re delivering what our residents and employers – and potential investors – want and need in the area.”

Cabinet Secretary for Transport, Infrastructure and Connectivity Michael Matheson said: “Across Scotland we have committed more than £1.9 billion over the next 10 to 20 years to City Region and Growth Deals and additional investments.

“This announcement represents another milestone in both the Bus Revolution and Early Years STEM projects as part of the Moray Growth Deal. The Scottish Government is investing up to £32.5 million in the Moray Deal, this will unlock investment and drive inclusive and sustainable economic growth across the area.

“Investment in these projects will help provide public transport which meets the needs of the region’s largely rural economy while reducing carbon emissions, and support the development STEM learning for young people. These projects will make Moray an even more attractive place to live and work, and support one of the Deal’s key ambitions of attracting and retaining young talent. 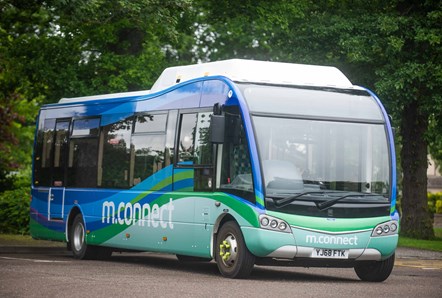